In 1916, before the importance of recycling was recognized, Robert, Morton and Louis Kowalsky believed that simple items, such as rags, paper, and metals could be re-used… and from that, an Empire was born.

Today, Empire Recycling is one of the largest family-owned recycling centers for metal and paper in the nation, and despite the growth of the company, one thing has remained in the forefront - providing customer service that is second-to-none.

With such a rich history, dating back 103-years, Empire Recycling Corporation is still a family tradition with brothers Steven and Edward Kowalsky at the helm.  They have lead the company to substantial growth, which now includes the Empire Family of Companies with nearly 200 employees.

Empire looks forward to the future… a future filled with growth, while always remaining committed to the environment, to our fantastic team of employees, and to our community. 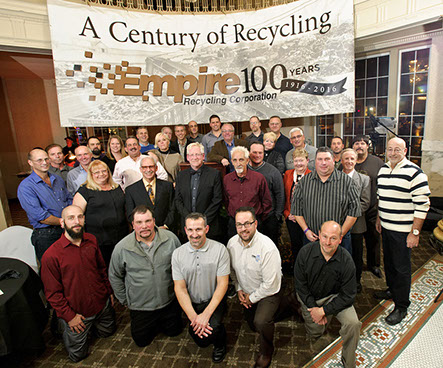 Community celebration of the 100th anniversary of Empire Recycling at Hotel Utica on Thursday, October 27, 2016 in Utica, NY. (PHOTO BY NANCY L. FORD)